The Trysting Tree, a large Gray Poplar (Populus × canescens) located southeast of Benton Hall, now Community Hall, was a popular gathering spot on Oregon State University campus.  According to one story, George Coote, a faculty member in Horticulture, planted the tree between 1880 and 1885.  An alternate view suggests that the tree likely was on the land when it was acquired, because the Gray Popular would have been considered a tree of such low landscape quality that it would not have been intentionally planted.

An early alumnus claimed that the Trysting Tree was so named because of its "magical effects on students, especially in springtime".  [A "tryst" is defined as an agreement to meet (as between lovers), or a meeting place.]   The OSU Class of 1901 christened it as the “Trysting Tree” after college President Thomas Gatch admonished two students for meeting there regularly for romantic purposes.  The tree's popularity was such that the Board of Regents felt obliged to place two arc lights on the cupola of Benton Hall (then the administration building) "to keep the tree from being overworked".

A poem, published in 1908, entitled The Trysting Tree, begins:

Beneath the faithful Trysting Tree,
A youth and maiden stand:
The youth, a noble lad is he,
Who claps the fair white hand;
The light that fills those earnest eyes,
Who can understand?

Its final lines are:

Long may'st thou live, thou worthy friend
Thou dear old Trysting Tree
Long may thy branches proudly wave
Majestic'ly and free
To mind us of those happy days
Spent at old O. A. C.*

On September 27, 1986, the original Trysting Tree was cut down because of advanced disease in its trunk and limbs.  Prior to its removal, Jack Stang (Department of Horticulture) took several cuttings from the tree and rooted them.  One these "off shoots" (Trysting Tree II) was planted on October 15, 1982 near the original tree by the OSU Mothers' Club .

The Trysting Tree (actually the Trysting Tree II) was added to the Oregon Heritage Tree List maintained by Oregon Travel Experience.  A ceremony recognizing this honor was held at the Trysting Tree site on April 6, 2012.  This included, among other items, a short talk by President Ed Ray and a student choir singing Carry Me Back to OSU, which includes the line,  "I love to wander on the pathway, Down to the Trysting Tree". 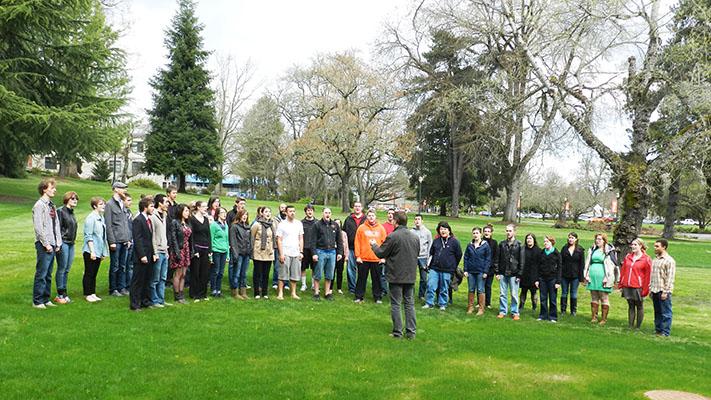 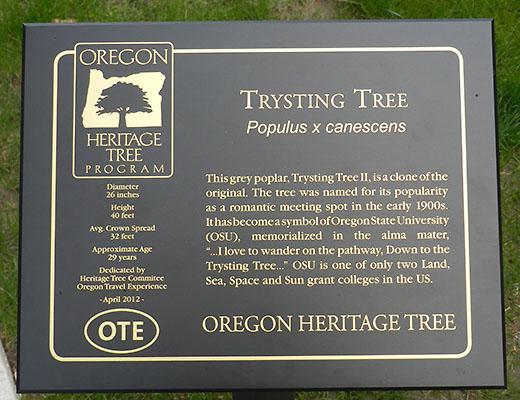